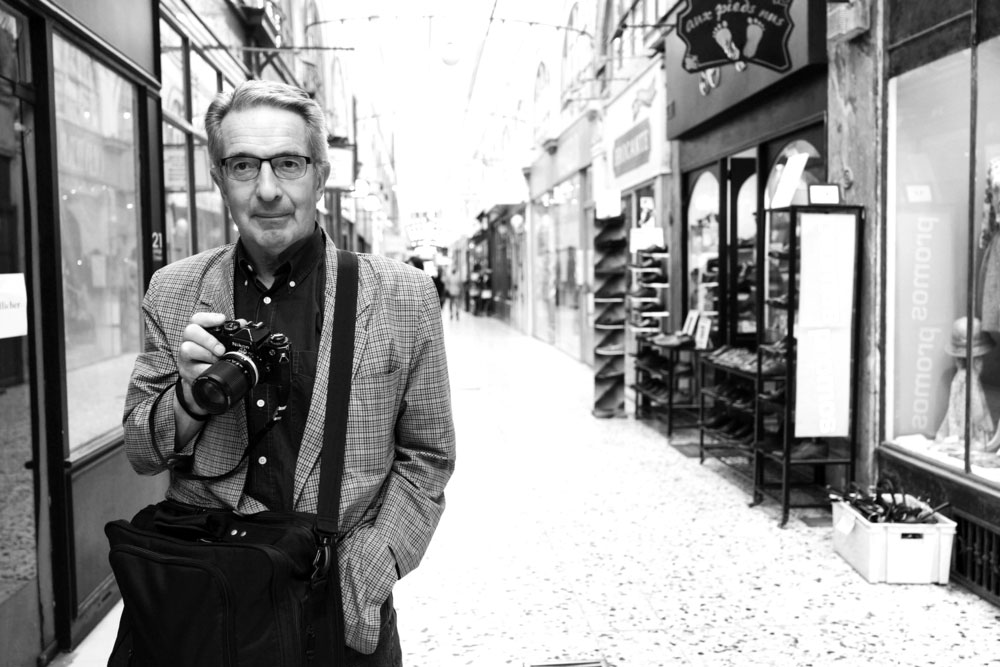 Photography played an important part in my working life as a graphic designer: either buying it, commissioning it or setting up and art-directing shoots. But I was a frustrated photographer even then – it was never my own work.

So in 2005, I took out my trusty old 35mm Nikon FE (purchased in 1979) and started taking photographs seriously. I set myself the same parameters that I still hold dear today: that I would only shoot on film, only in black and white, and that all my images would include a human content.

In the beginning, I was mostly on the streets looking around for the unusual and the quirky, but of course, I always included the human element.

Since 2009 I have concentrated on large projects. My first three projects have all resulted in exhibitions…. in 2011 CityShapes with over 20 images, and in 2014 Under Glass – The Passages of Paris. For Under Glass, I was extremely fortunate to have an exhibition in central Paris for a month showing nearly 40 photographs.

My most recent project, Under Tracks,  a Celebration of London’s Railway Arches, was shown at The Underdog Gallery in London Bridge in June 2017. The project took over three years to put together. At Underdog I displayed 96 framed photographs. To promote the show, I was lucky enough to have a 25 minute prime-time interview on The Jo Good Show on BBC Radio London. As this project recorded social history, annotated digital files of the entire Under Tracks collection (over 300 images) have been preserved in perpetuity, in the History of London Archive at The Bishopsgate Institute Library in the City of London.

I have started a fourth project centred on The Square Mile in the City of London, however my current focus is on a project producing Cyanotype prints

I am a member of LIP (London Independent Photography) and early in 2019 I set up a Film and Darkroom Group for fellow enthusiasts. We meet each month in the crypt of a church in Waterloo, London. I believe this is the only such group in London, maybe even in the UK?