The 50 exhibitions of  Les Rencontres D’Arles 2014 are housed in over 20 locations: in halls, churches, unoccupied office buildings – amazingly, in a set of vast disused railway sheds. Then there is the “fringe” – 60 shows listed as Voies Off (Voices Off) in empty shops, cafés, even the cellar of a private house. And then the very unofficial – in a disused garage, on some railings – even prints strung between two trees on a washing-line in a park. And every wall, tree, lamp post, and hoarding is covered in flyers and posters advertising the hundreds of exhibitions. All this appears to be accepted happily by the town. The narrow streets are full of photographers walking from one show to another.

My highlights were: Lucien Clergue, who showed some lovely prints from the 1950s of gypsies in the Carmargue – a real class act; the Spaniard, Chema Madoz, who produced dynamic, graphic surreal monos of still-life stitched-together images – think dinner plates not placed vertically on a draining rack but in the grilles of a street drain cover, and you’ve got the idea; and American Mitch Epstein, who showed big prints of singular trees shot in New York City (again in mono).

A nice surprise in Voies Off was a show entitled West Coastby the Parisian photographer, Hedge. His images of colourful beach scenes were shot in Biarritz using a digital pinhole camera. The short exposures produced slightly out-of-focus prints that had a real ’60s feel. Excellent.

Sadly, the only living darkroom photographer we came across (apart from Clergue) was Boris Hazoume. Shooting mostly on Tri-Ex from a Nikon FM or Leica, his well-crafted monochrome street images were, for me, a breath of fresh air amongst the surplus of contemporary conceptualised colour around the town.

One of the most bizarre shows was from a Dutch guy, who had shot exactly the same car parking space, presumably taken from the window of his first-floor flat. Each huge print – and there were easily 20 or so – showed a different car roof and bonnet. Probably to be seen soon at the Photographers Gallery in London! 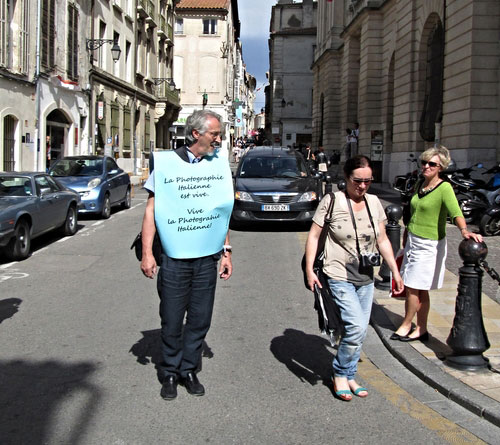 Nicest moment was meeting an Italian, Beppe Bolchi, who was walking the streets wearing a sandwich-board. Hacked off with the fact that there were never any Italians showing at the official Festival, Beppe proclaimed “Italian photography is alive. Long live Italian photography!”  It will be interesting to see if any Italians are included next year?

Arles has something for everyone, photographically. The festival, which runs until 21 September, is well-organised and varied. From the iconic, the beautiful, the vintage and the contemporary, through to the totally conceptual and almost insane, it is all here. Only the French could put on a show like this! 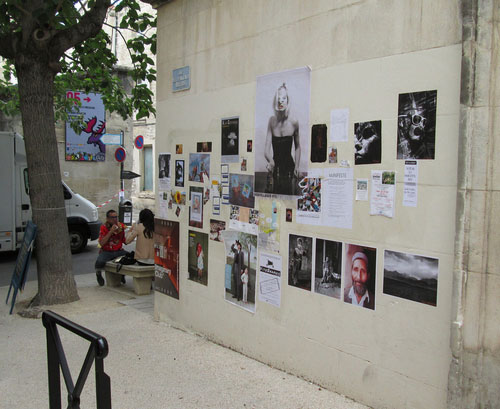